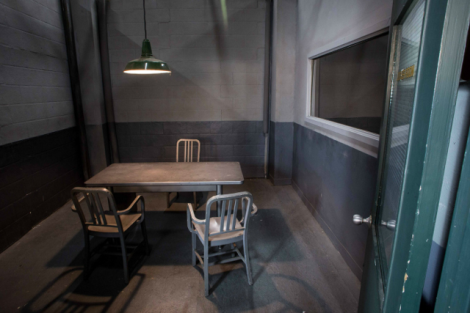 In a nutshell, in Part 1, our narrator, Skinner, has witnessed the killing of a young girl by a serial killing street preacher. He’s vowed to kill the preacher so he won’t kill again, but the preacher outsmarts him and in Part 2, Skinner ends up running for his life only to be downed by a massive, unidentified force. Here’s a lead-in followed by Part 3 of 4:

“You’ve done it now,” the preacher said. “You hear those sirens? They’re headed this way.”

I gritted my teeth and tried to summon some power. I thought of the Trinity River. How could I have forgotten the blessed Trinity? I could wash the preacher’s vileness from me there, get another bottle from Elmer’s and drink him clean away…

“The police are getting out of their cruisers, coming for you, and it’s all your fault,” the preacher said.

I could hear yelling. I changed course for the river.

“You should have used your mind to stop them,” the preacher said.

I was flattened to the ground by a massive force.

“Stop them! You have to take control,” the preacher yelled.

I fought like a rabid dog, snapping at flying limbs and biting at faces that got too close and I spat and kicked through the yelling and pinning and the steel grips until everything went black.

I woke on a dirty, smooth and stinking floor. I was lying flat out on my stomach, the right side of my face in fresh vomit. I could feel my hands bound behind me. I didn’t move, just rolled my eyes around to check my whereabouts. I saw feet, shins, two guys on a bench with handcuffed wrists resting on their knees.

“Someone get the fuck in here and clean this shit up!” one of the guys yelled.

I heard more than one set of footsteps coming, then a rattling of a lock on a steel cage.

“Stay where you are!” came a booming voice.

A guard came through with a hose, sprayed my head and chased the rest of the vomit down a iron grate in the floor with a stream of water. He backed out and a cop came in and yanked me to my feet. He pulled me out of there and he and another cop dragged me down the hall, pushed me through a gray door and slammed me into a gray metal desk then jammed a chair under me.

I sat there shivering, leaning into the warmth of the blazing light hanging down from the ceiling on a long cord, while the cops banged on about some killings been going on, threatening me with being able to produce fingerprints, trying to get me to admit to things I had no part of. I knew who they wanted, but after the treatment I’d got, I wasn’t exactly in a helpful mood.

But then, I didn’t know how much longer I could last like that with my hair all dripping with cold water, chilling me anew with each drop, and I could feel that feeling I get before the voices start and my muscles grab and jerk me around until I black out.

The answer came quickly enough when the cops upped their game. They introduced a new person to the room, a pretty woman who wore T.J. Eckleburg spectacles, and before they even introduced her I knew she was a psychiatrist. I can feel the sickness coming off them. Brinson was her name. She watched me intently with her ice blue eyes while the cops made me watch CCTV footage of the preacher caught in various locations doing untoward things.

“Who is that man, Mr. Skinner?” Brinson asked.

“No, it is not,” I said as politely as I could manage.

“Who is it then?” Brinson said.

“Oh for crissakes, that’s the preacher, The New Prophet, everybody knows who he is!”

“An alley off South Griffin Street.”

“Why didn’t you do anything?” Brinson asked.

“There was nothing I could do. The preacher had already sewn her mouth shut.”

“Like this?” a cop said as he motioned to the 2-way mirror and an investigator walked in with a clear plastic bag containing the screaming marigolds and gilt thread.

He shouldn’t have done that. I felt queasy. “Maybe,” I said, and I turned my head far away from the bag but I could still hear them. “You did it,” they screamed.

A blast of laughter came from the cops. “Oh no,” one cop said, “We haven’t even started yet!”

Brinson frowned at the cop and looked back at me.

“Just a few more questions is all it should take, Mr. Skinner. Now going back to the alley, why didn’t you go to the police?”

“Because I went to the girl and felt for a pulse and I knew the cops would think I did it so I ran away.”

“You did it,” the marigolds said.

“You should have used your mind to stop it,” the thread said.

“Why did you touch her, Mr. Skinner?”

“I thought maybe she was still alive.”

“Really?” Brinson said. “Couldn’t you see that her throat was slashed to the neck bone and that her midsection had been slashed from sternum to crotch and from left to right just under the rib cage and that all her organs lay about on the ground around her?”

I squirmed. “Well you never know. Medicine today is amazing.”

“Stop her from getting in! You have to take control!” the preacher said.

“Yes, she was very pretty.”

“What kind of thing is that to say?” I looked very carefully at Brinson. She was up to something…

“It’s so nice to be pretty in this world of ugliness, don’t you think?”

This was blasphemous! “No!” I jumped up from my chair. I looked around and saw the cops had risen, too, poised to put me out of commission. I know I was making a mistake but I couldn’t let it ride. I sat down. “No,” I said calmly. “It’s not nice.”

“Squash her,” the preacher yelled, and the marigolds tittered in the background. “We told you,” the thread said.

“Why don’t you think that?” Brinson asked.

“That it’s good to be pretty in this world? Don’t you think it could help balance the ugliness?”

“No!” I couldn’t stand it any longer. “No I don’t. Nothing can balance it. Ugliness is all-pervasive!”

“But if you remove the beauty from the world it for sure doesn’t have a chance.”

“It’s too late,” I said. “Better that beauty leave here and go back to nothingness, to pool with other beauties and make their own world.”

“Traitor!” the preacher yelled at me.

I laughed. “I told you I was the New Jesus,” I yelled.

“I just want to touch them before they go,” I said.

“They are the flower of the dead.”

“Why the gold thread?”

“It’s their sacred initiation to the joyous afterlife.”

“Why are you in a position to usher them out of this world?” Brinson said.

“For the love of God, save us both,” the preacher boomed.

“By whom?” Brinson asked.

“By the spirit of the one that said…,” and I looked about the room, made sure all were seated and reverent, “‘It is not true, it is not true; That we came to live here; We came only to sleep, only to dream.’”

The preacher screamed, “Murderer!” and he raked down through my insides with his unholy claws, gutting me like he does his young girls and while I still could, I sprang to the desktop and bit with all my worth into the long cord of the ghastly blazing light.

Click here for more on prompt “SS2 #31 – sacred threads and marigolds” from other Sunday Scribblings participants.